We are excited that you are interested in volunteering at Ohio County Healthcare. 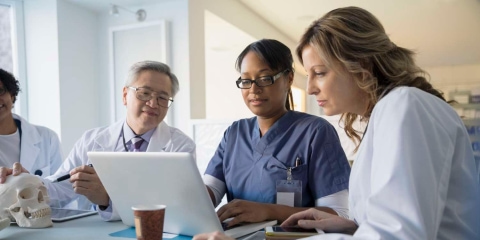 Currently we have two ways for members of the community to volunteer. Adults are able to volunteer through the hospital Auxiliary and high school students can sign up to be a part of our summer Volunteen program.

All volunteers are subject to a background check, drug screen, training and orientation and any other requirements mandated to work in a healthcare facility.

Below is more information about our programs along with applications. We hope that one of these programs will be something you deem worthy of your time.

A "chit-chat" over coffee cups on October 8, 1969, at the Ohio County Hospital and the determination of hospital personnel to improve facilities and accommodations emerged in the formation of an Ohio County Hospital Auxiliary. Thirty-five charter members were registered at the two-hour organizational meeting held at the Hartford Christian Church.

A gift and coffee shop, one of the top priority goals, got the green light and work began immediately on a more permanent facility. Bylaws were read and accepted, the Steering Committee was named to act as Nominating Committee for the election of permanent officers, and several other committees were assigned various projects for hospital improvements and recognition.

Today the OCH Auxiliary is still working hard to make sure our patients have a pleasant experience while at the hospital is as comfortable as possible, and that our facility and equipment is up to date. In May of 2016 The Gift Shoppe underwent renovations and is now open and restocked to offer a great selection of gifts and goodies. The Gift Shoppe is completely managed by the Auxiliary and all proceeds are used to futher their mission.

Along with proceeds from The Gift Shoppe, the Auxiliary has fundraisers throughout the year to help fund projects. Some of these include: Bake sales, Scrub sale and our always popular $5 jewelry sale. The Auxiliary is an organization based on care and service to others and our members truly do make OCH special.

To see some of the accomplishments of our Auxiliary click the link. Also if you are interested in becoming an Auxiliary member please click the application link, print it, fill it out and return it to:

Our student volunteen program is for high school students interested in the medical field both clinical and ancillary or students that are just looking to gain some volunteer hours. This program allows students to work in most of our departments, gaining hands on experience. It begins in May and runs through August.

If you are interested in becoming a volunteen please click on the application link below, print and fill it out and return it to:

What type of care do you seek?

Ohio County Healthcare offers a broad range of healthcare across a diverse landscape.